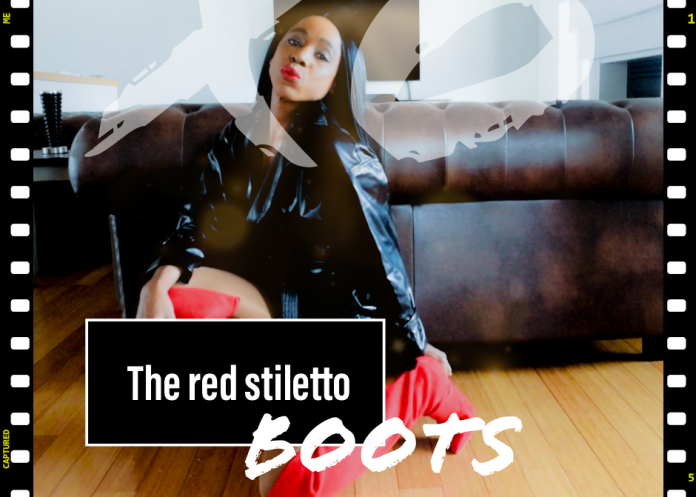 If you’re shopping for red thigh high stiletto boots, there’s a wide selection on Amazon (here)**. The boots featured in this post are a pair of JLO JENNIFER LOPEZ boots from DSW – the Azzala Over The Knee Boot purchased in 2021. They don’t appear to still be available, but there are some similar styles of faux suede red thigh high (over the knee) stiletto boots on Amazon. 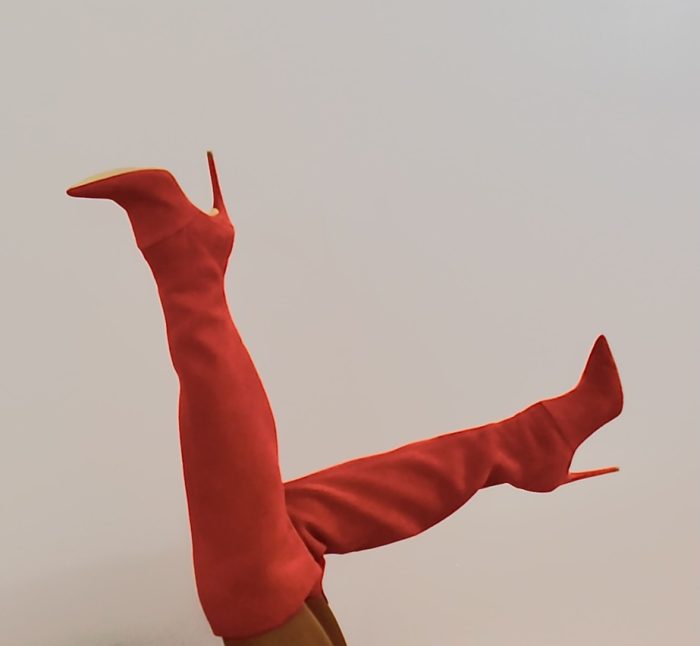 I’ve never worn these boots out in public, and I would never wear them out in public simply because I cannot walk confidently in stilettos of this style except when at home pretending to sashay down a runway. The heel height is only 4½” but these are still hard shoes to comfortably walk in if you’re not a pro at walking in stiletto heels. 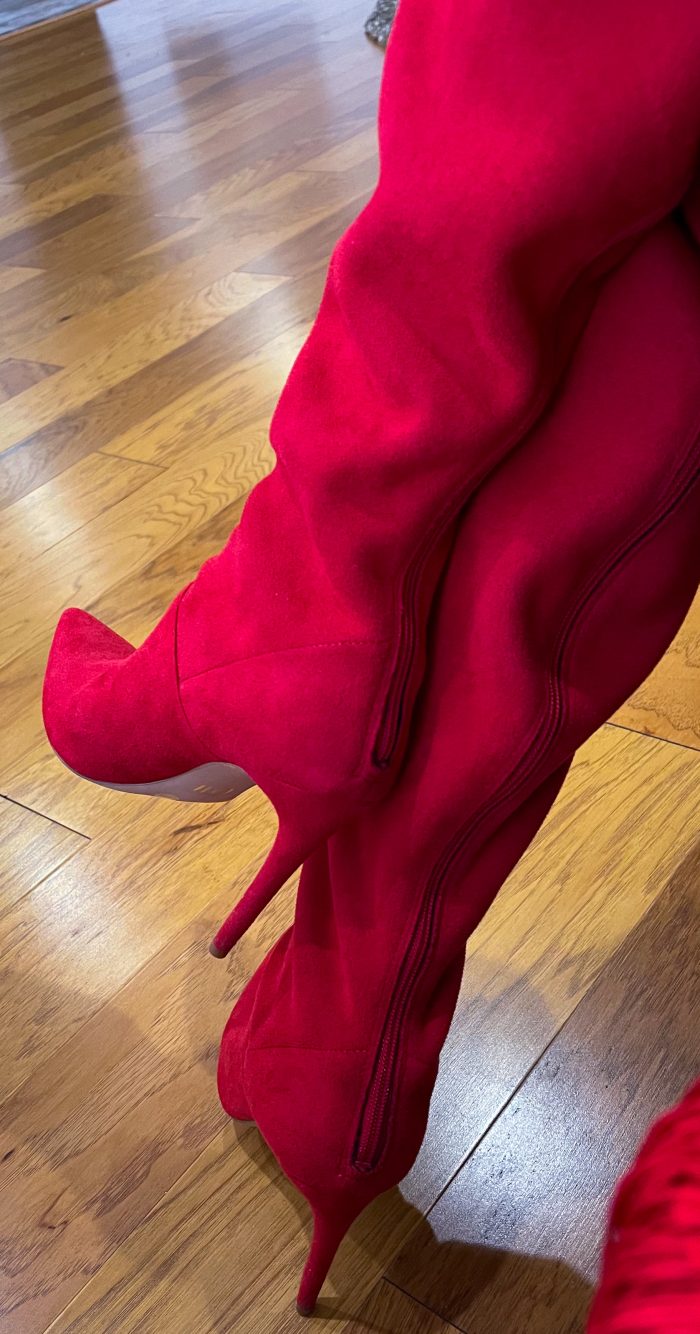 I purchased these boots for an outfit idea for a video that I never got around to making. It was for my song “Watch Me While I Cha Cha“.

The boots are cute enough and reasonably comfortable if wearing for a short amount of time. These are the same boots shown in “Wear all red – is it okay?“

Recently I was reminded that what you wear tells the world things about you. Well, let me rephrase that. Because, let’s be honest if we dare. What a person wears does not tell us anything about them. We assume to know because we accept the validity of the absurd ideas that the media has spread around over the centuries. So if it’s said that a person who would wear red thigh high stiletto boots has a certain kind of reputation that’s not necessarily to their credit, when we see someone wearing red thigh high stiletto boots, we assume to know what they are all about even though we know absolutely nothing about them. 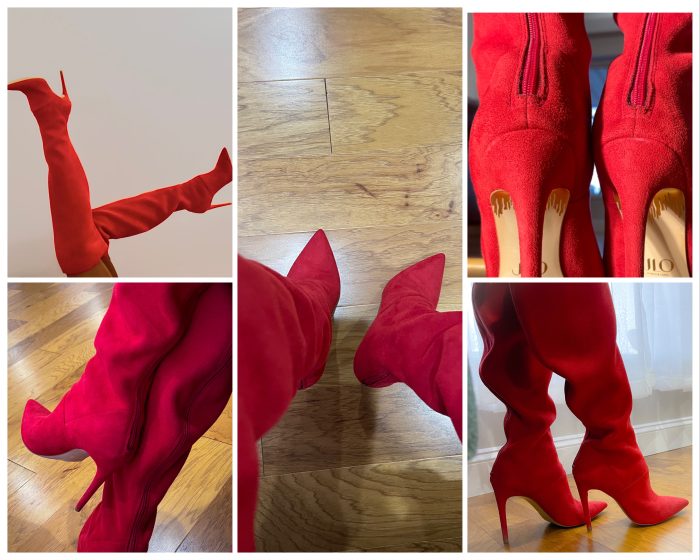 So can you imagine what people who believe these things think of you when you step out wearing red stiletto thigh high boots?

Many people already believe that red is a color you wear if you have a certain kind of reputation. You’re loud and brazen and wanton and lacking morals and values etc. This is of course pure nonsense, but some people believe it. I’ve written before that I tend to gravitate to red. I also happen to like thigh high boots. This is enough for some people to decide the kind of person I am. 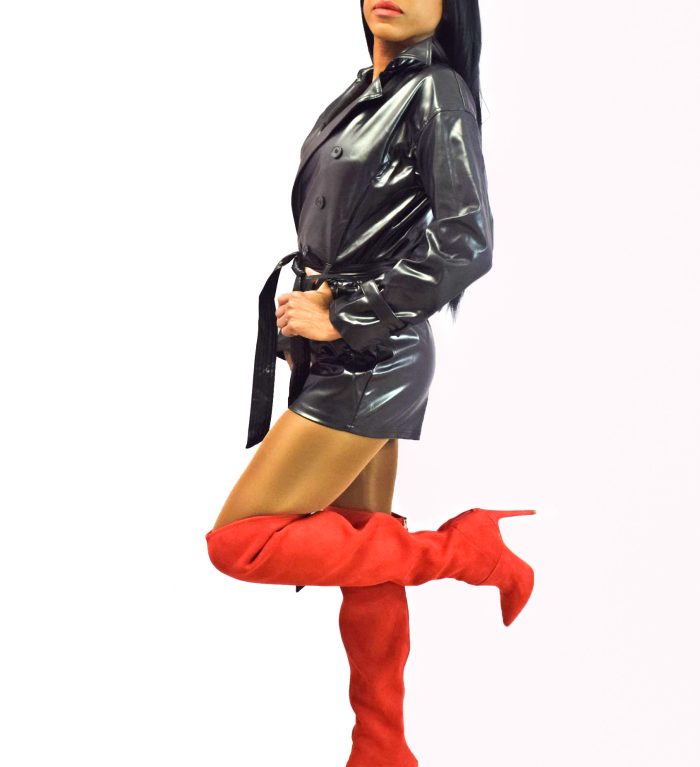 In my humble opinion, people should be able to wear whatever they want to wear without having to worry that somebody might think something negative about them because of what they’re wearing. I get that there are times when people wear things for the express purpose of sending the world a message. But when someone is dressed for their own self and going about the business of living their life, we should really try to avoid the impulse to cast judgement on them because of what they’re wearing. It’s an easy way to do better and be better. Nobody’s suggesting it’s always easy to be better and do better. But imagine what would happen if we all made it a goal to try to stay conscious of when we are being mean to people even in the privacy of our thoughts?

**Link is an affiliate