Search
My account
Get into your account.
LoginRegister
Plans
Home The Monica Archives Style Practice Thursday with the black and white polka dot scarf

I decided to get dressed up for work today. Since I work from home I usually work in my pajamas or lounge wear. But I’ve decided this year I’m going to try to get dressed for work every once in a while. Every once in a while started today. I decided to try the outfit I put on the mannequin earlier this week–the animal print dress with the black jacket and the black and white polka dot scarf. I tried it with some black tights and my old black leather ankle boots. 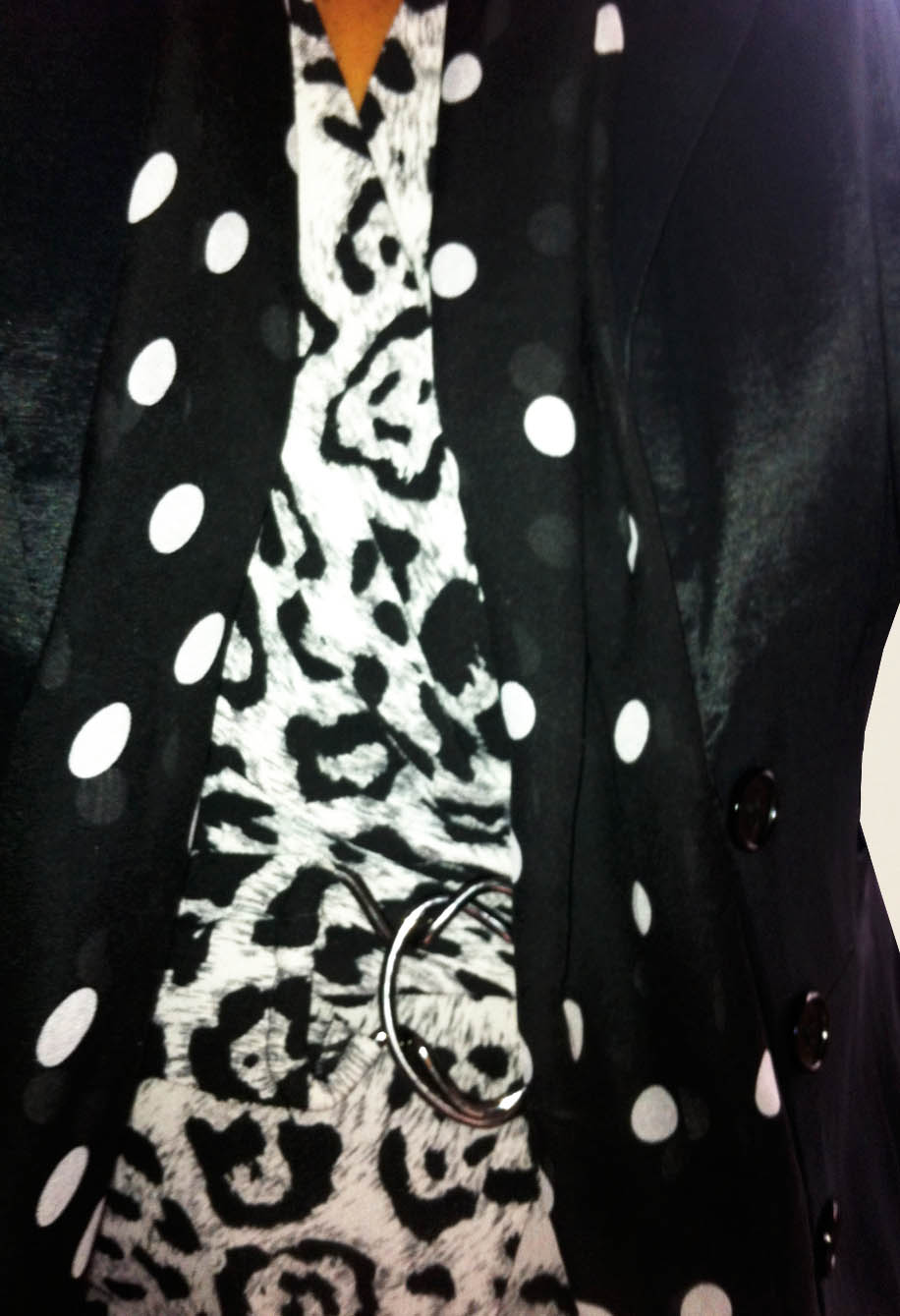 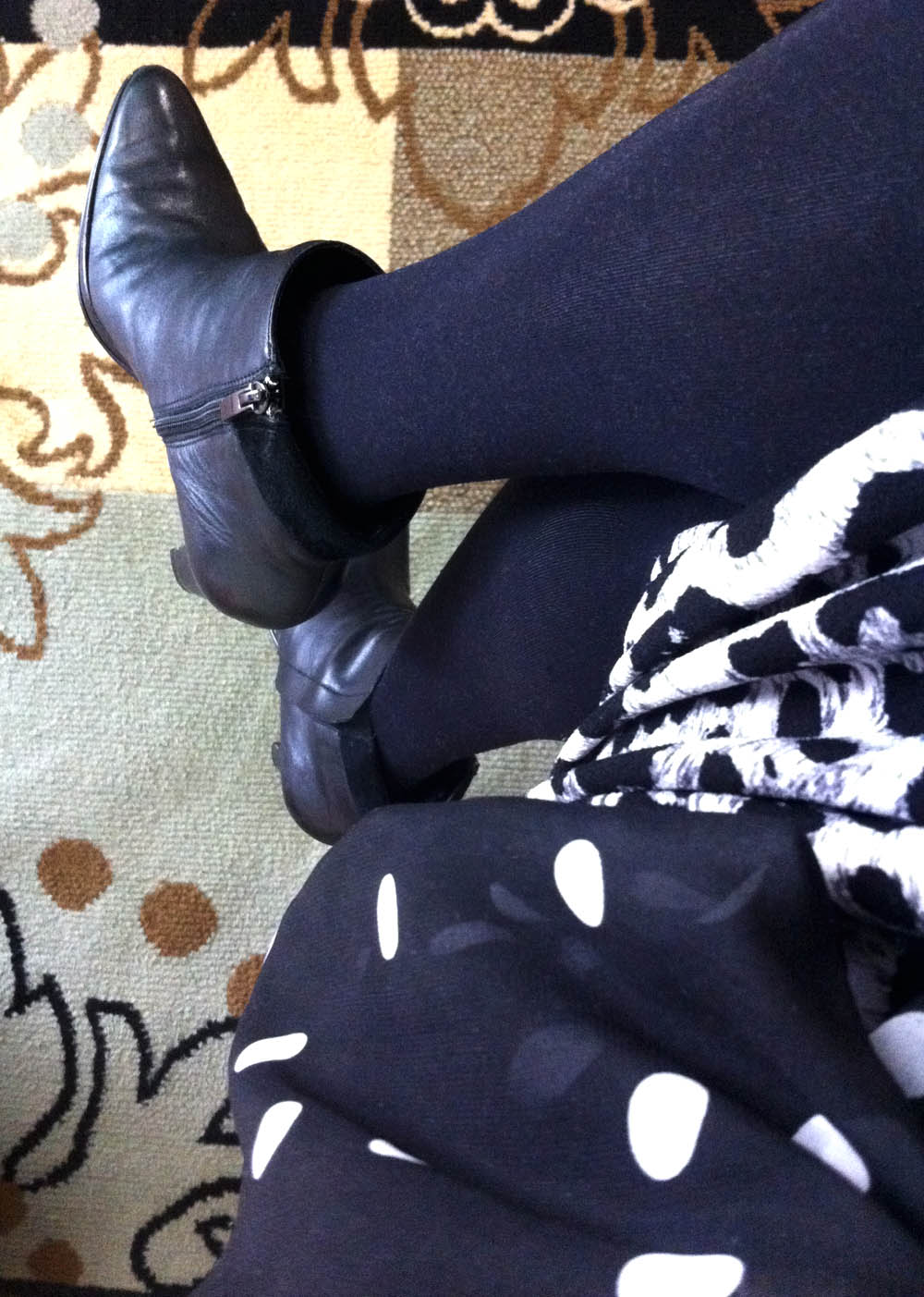 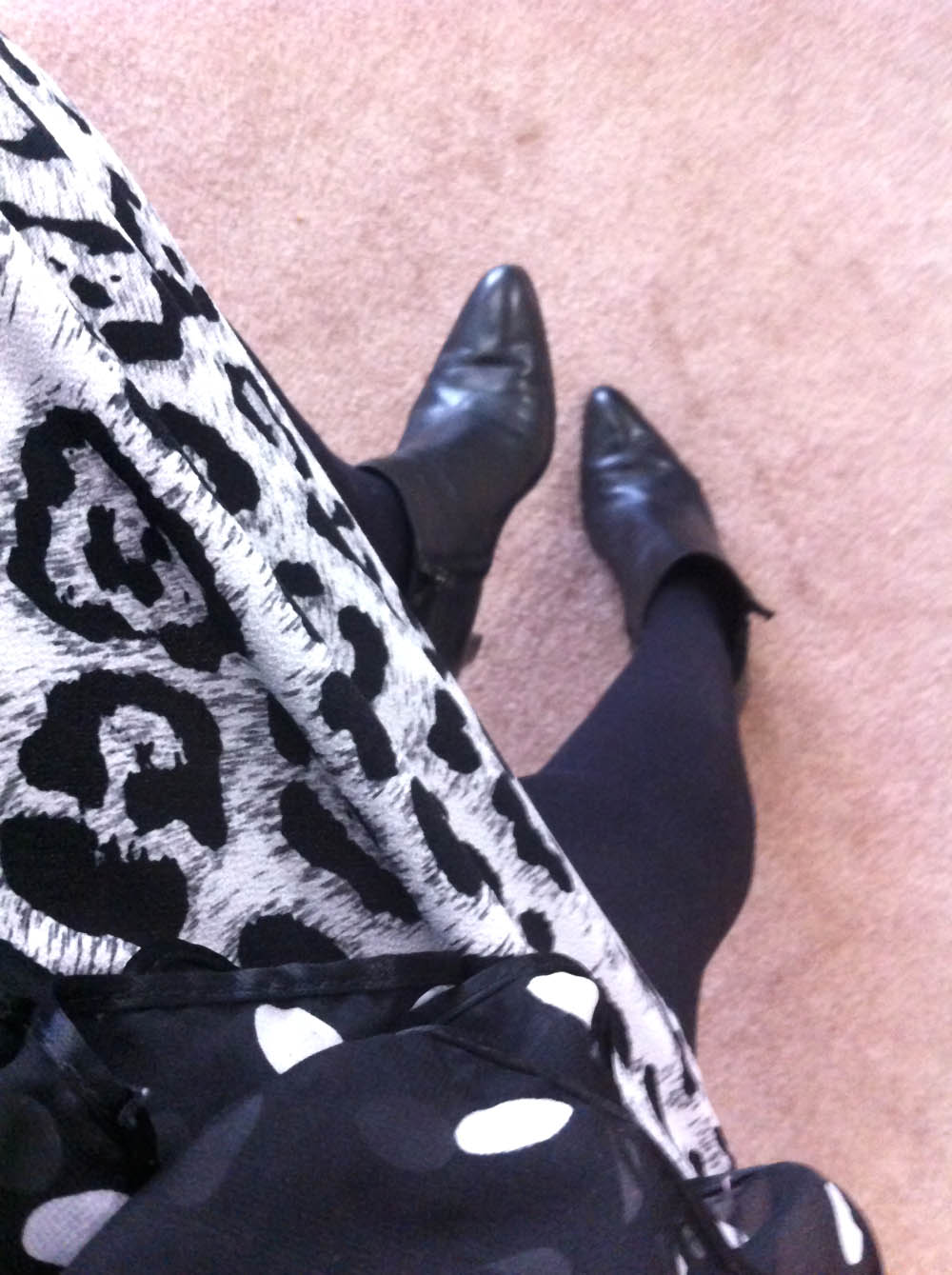 I didn’t necessarily love the look on me. I think pumps would be a better choice than ankle boots for the dress worn with a fitted jacket over it. The ankle boots made it look a bit on the wicked witch of the West side. And the black tights didn’t help to improve it.

So I changed out of the dress and put on a white long sleeved button down shirt with a black knit skirt. I kept the jacket, ankle boots and tights as part of the new outfit. These are all years old items. The skirt is so many years old I’m embarrassed to say. 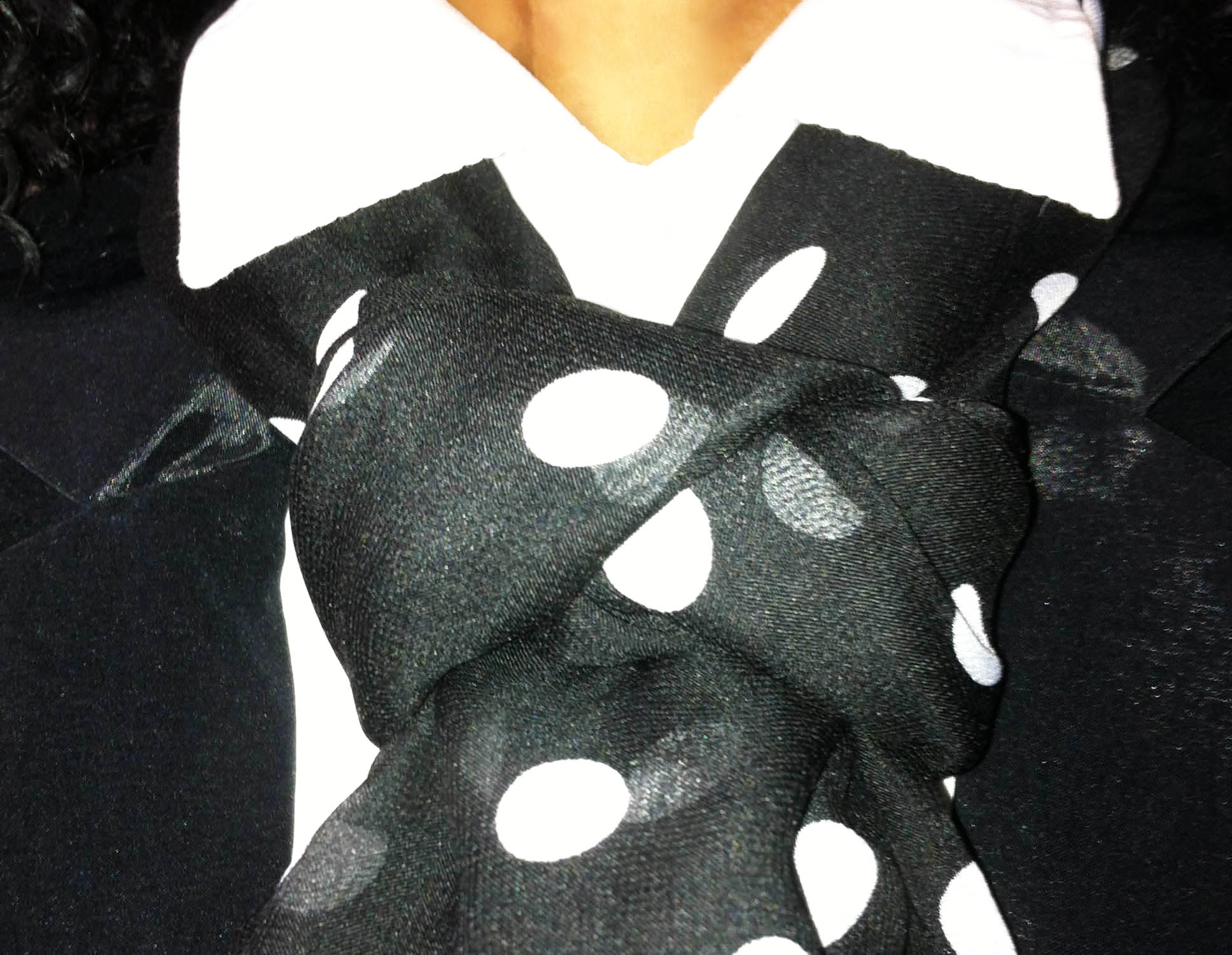 I have to admit I’m glad I don’t have to deal with the hassle of having to get dressed for work every day. I have to hand it to the women who do have to concern themselves with the issue of what to wear to work five days per week for the better part of their adult lives. I guess if I was going out to work I would be spending a lot more money on clothes every year. But since I have worked from home for such a long time and because I don’t have much of an outside life I haven’t had need to buy too many things. 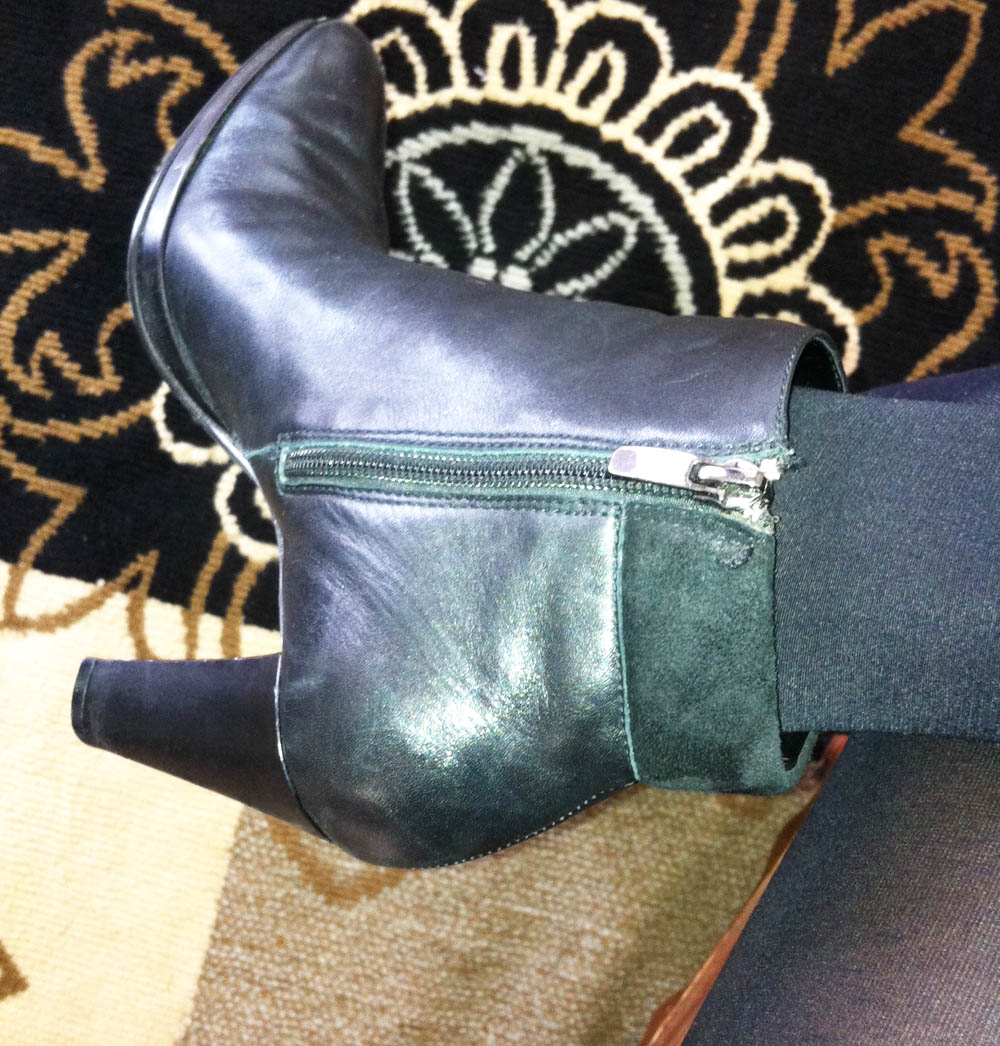 These boots are a good few years old. I won’t say exactly how many; but they are old. I’ve had them for years. But I’ve probably worn them out fewer than 5 times. They are 3.5 inch heels and I struggle even in 3.5 inch heels. 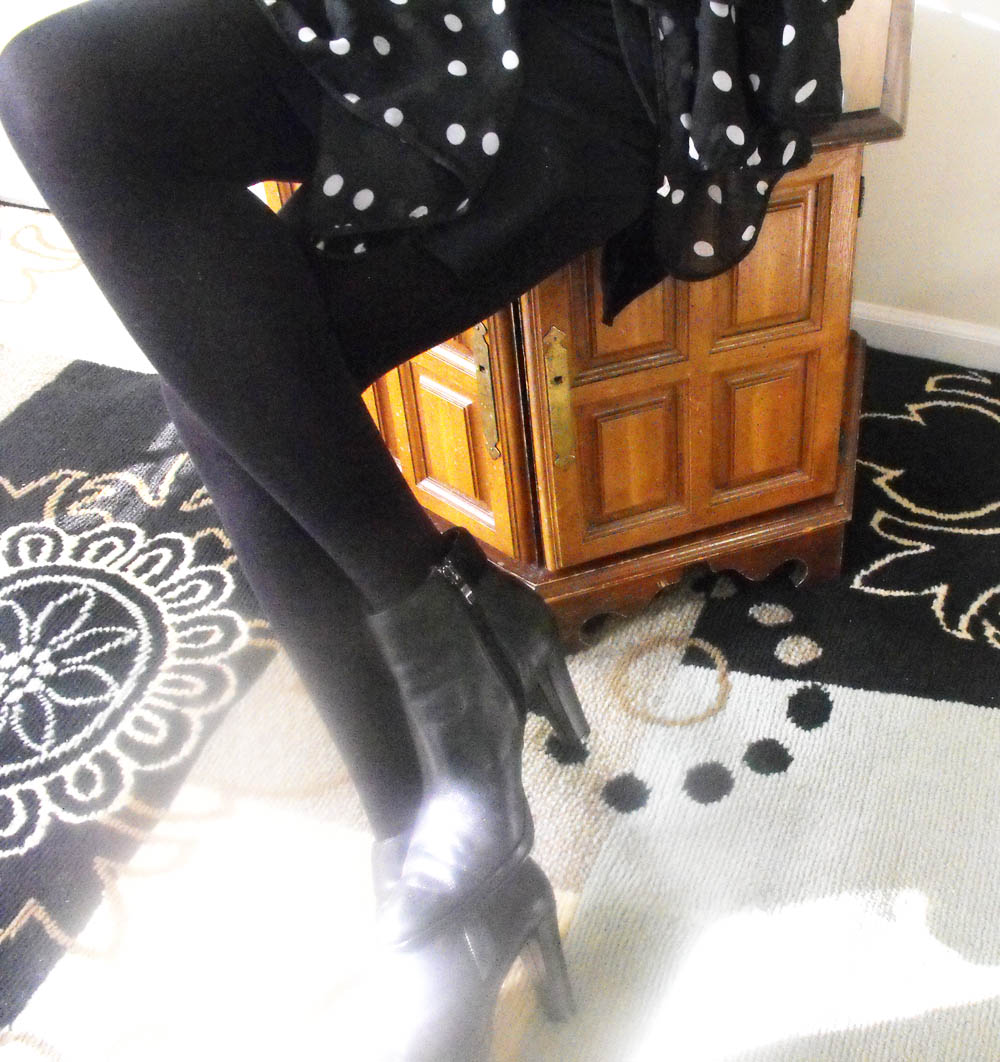 I bought the scarf on Amazon.com in early 2014. It’s a nice enough scarf considering it cost under $10. I’d agree with the customer review that says the color in reality is not as vivid as in the picture on Amazon’s website. In the picture the black looks very black and the white looks very white. You almost can’t tell the scarf is actually see-through. But I’m not all that picky so it doesn’t bother me that the color in reality doesn’t match the picture on Amazon’s website. It looks perfectly fine as is. And it’s reasonably soft.

The background in the above photo is apparently a waiting room at a medical facility. I liked the look of it so I edited out my real living room from the picture and popped myself into the waiting room courtesy of Photoshop.