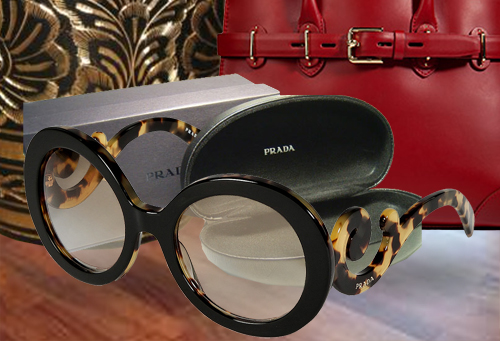 These Prada Acetate Baroque Gradient Sunglasses are $290 which I guess means they are affordable not just to ladies with million dollar bank accounts; but for those in the middle income bracket as well. Unfortunately for me they are still way too expensive.

I would love to be able to afford expensive sunglasses. I see so many that I like; but I am a starving blogger. Well” I’m not literally starving because I do have a working spouse who is feeding me while I struggle to try to make something happen with my blogs.

These are described as the “ultimate cool accessory for the sun”.

Buy It!
Probably the most hands-on I’ll ever get to a pair of these was the work I did in photoshop setting up a virtual pair to create the above picture.

Considering what designer sunglasses can cost $290 seems like an okay price. If I had the money I’d buy a pair. Why not? Sure it’s not really necessary to have $290 sunglasses; but if you have the money and you like the sunglasses what are you supposed to do stand on principle and decide not to buy it because of the frivolity that it represents? It’s got to be okay to indulge your materialistic desires from time to time.

Here are the black version of these sunglasses that Beyonce and Kourtney Kardashian were seen wearing.

Kourtney Kardashian doesn’t have Beyonce’s money but she still has enough that $290 is also nothing for her to spend on a pair of sunglasses. She apparently has a net worth of about twelve million. Don’t know how accurate that is but she’s certainly a multi-millionaire.

It pays to be pretty doesn’t it? I used to think I was pretty; but now I’m starting to understand why no one else ever seemed to agree. It was because I wasn’t pretty. If I was as pretty as I used to believe I would be a multi-millionaire. Considering how little money I have I am tempted to think maybe the people I’ve encountered in my life who thought I was actually rather ugly might have been seeing me with the clear eyes. Ugly girls don’t get rich unless they happen to be talented. So it’s because I am ugly and talentless that I am poor. Oh well. Guess I’m doomed.