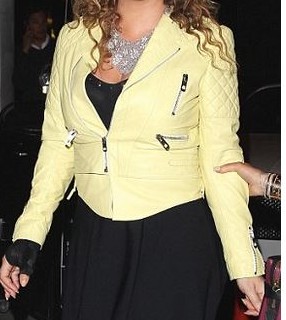 We love us some Mariah Carey. Wish we could sing like her because then we’d be rich like her and we’d be out on a yacht in some exotic locale sipping something divinely intoxicating instead of sitting in front of a computer screen discussing what Mariah was wearing when she joined Courtney Love for dinner at Craig’s in West Hollywood, California, last Sunday.

Mariah was dressed in what appears to be a black flared skirt with a black fitted top, black tights, black leather knee high stiletto boots and a pastel yellow Balenciaga biker style jacket.

We read through some comments left on other sites about Mariah’s outfit and some people seem to be of the opinion that Mariah has odd taste in clothes and needs a new stylist.

What do you think?

Our thoughts on Mariah’s outfit… 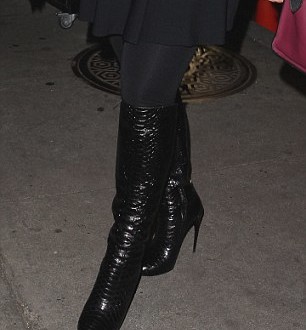 So we’re giving her look the thumbs up because we admire her fearless approach to style. We’re inspired by her attitude. She couldn’t give two figs what anyone thinks. She’s gonna do whatever she wants, including dressing the way she wants to dress.

What item(s) do we want to steal from Mariah’s look?

Next up Khloe Kardashian…

Here’s another lady who doesn’t let other people break her stride.

She chose a pair of Christian Louboutin pumps to wear with the dress. According to her facebook page the dress was a gift from her sister Kim.

What item(s) do we want to steal from Khloe’s look?

Amanda attended the premiere of her latest film While We’re Young in New York City on Monday wearing a red Valentino dress with red Givenchy pumps. She had her hair done up in a couple of braids. Check her out on the red carpet talking about how she absorbs bits and pieces of the characters she plays and how she’s looking forward to her 30s.

What do you think of Amanda’s look?

While we’re not necessarily feeling Amanda’s hairstyle for the occasion we do think it’s a cute hairstyle in and of itself. Just not how we would have done our hair to go with the look. The look itself is lovely. Nothing over the top. A nice cute dress with elegant sandals.

What item(s) do we want to steal from Amanda’s look?

And now for Jennifer Lawrence…

Jennifer was photographed while exiting the Greenwich Hotel last Saturday in New York City. She was wearing a Dior sweater and a Dior skirt under a black coat. She also wore black Manolo Blahnik pumps and Tom Ford sunglasses.

Some internet commenters felt that Jennifer’s outfit was a little too mature for her.

What do you think?

We think she looked perfectly fine. She’s a grown lady. 24 isn’t too young to wear a mature look. If she’s dressed like she could be someone’s mom, well we have news for you, 24 is as much mom age as 34. There are plenty of 24 year old women who are someone’s mom.

What item(s) do we want to steal from Jennifer’s look?

Christie Brinkley was photographed while leaving NBC studios in NYC on March 24th. She was wearing an Alaia dress with Burberry sandals.  Can you believe Christie Brinkley is 61 years old. No way right? This woman looks seriously amazing. She apparently credits her youthful looks to a vegan lifestyle and always protecting her skin from the sun. But let’s face it, most of us will never look like this at 61 no matter what we do.

One thing that is definitely in Christie’s favor and something that’s in all of our control–she maintains a svelte figure and she doesn’t dress the way society tells her she should dress for being in her sixties.

Take notes ladies who are letting people pressure you into dressing a certain way because you are older than 30. Style matters; and you might be making yourself look and feel older by dressing as if you’re no longer entitled to have fun with your life.

Do you think Christie Brinkley dresses too youthfully for her age?

We think Christie dresses just fine. She’s an inspiration. But we can’t help wondering what her life is like. She looks amazing. She doesn’t look like she’s 61. But she is 61. So does she get treated according to the age she looks or does she get treated according to the age that she is? Does she feel as youthful and vibrant and alive as her smile and the look in her eyes suggest? Because the reality for many women is that natural things start to happen to them as early as age 35. And some of these things take away not just their youthful looks but also their youthful energy. So we’re curious to know if Christie deals with the same things as the average 60 year old even while looking better than many 40 year old women.

What item(s) do we want to steal from Christie’s look?