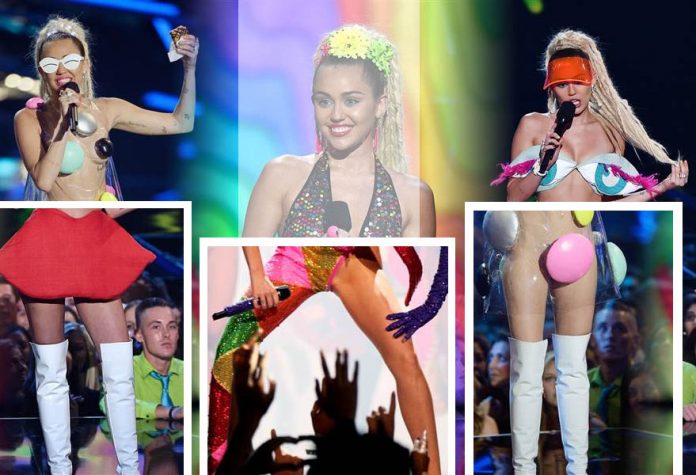 We didn’t watch the event. Did you?

To be honest We didn’t even know it was happening and have only become aware of the headlines since we came across a picture of #MileyCyrus on #TMZ earlier.

Miley hosted the VMAs. She went through quite a number of outfit changes. And most of her on-stage costumes were typically risque. But it was what she wore on the red carpet that people are mostly talking about.

Via today.com – The annual MTV Video Music Awards are known for attendees’ wild antics and even crazier outfits. And that goes double for this year’s host, Miley Cyrus. The world waited to see what the “Wrecking Ball” singer would wear and Cyrus delivered on her no-holds-barred promise, arriving in a Versace outfit that made the singer resemble a human chandelier. (source link)

So Did you see what Miley wore to the 2015 MTV Video Music Awards?

To be honest we’re past the point of being shocked about anything Miley does.  And the only reaction we had when we saw her posing on the red carpet in her custom Versace outfit, was one of curiosity. We were curious to know what it looked like from the back.

Here’s the front of her outfit…

And here’s the back…

Not surprisingly lots of people have lots to say about Miley’s choice of attire. It’s a recurring theme.

What we have to say on the subject…

Actually we have nothing nothing. There’s enough misery in the world. There are plenty of more serious things to get outraged and upset about.  Miley is a grown woman and she can dress however she pleases.

Now if you ask us if we’d ever wear that outfit in public the answer is no. But that’s because:

So we’re not going to criticize Miley because, what’s the point of that? Far from criticizing her we’re going to give credit where it’s due. The girl is looking amazing! And she knows it too. Check her out showing off for the photographers on the red carpet. Love her hate her, she doesn’t care. She still wakes up ever morning with millions in the bank.

This is what happens when we spend more time paying attention to other people and what they are or aren’t doing than we spend creating our own interesting life stories. The answer isn’t for Miley to start doing what people think she ought to do. It’s for people to stop paying attention to her if what she does is bothersome to them.

Sleepwear Choices: 5 Comfortable Clothing for Women That Are Actually Eco-Friendly

The power of accessories: A quick guide to accessorize like a stylist

Are you too old to be wearing Fashion Nova clothes?