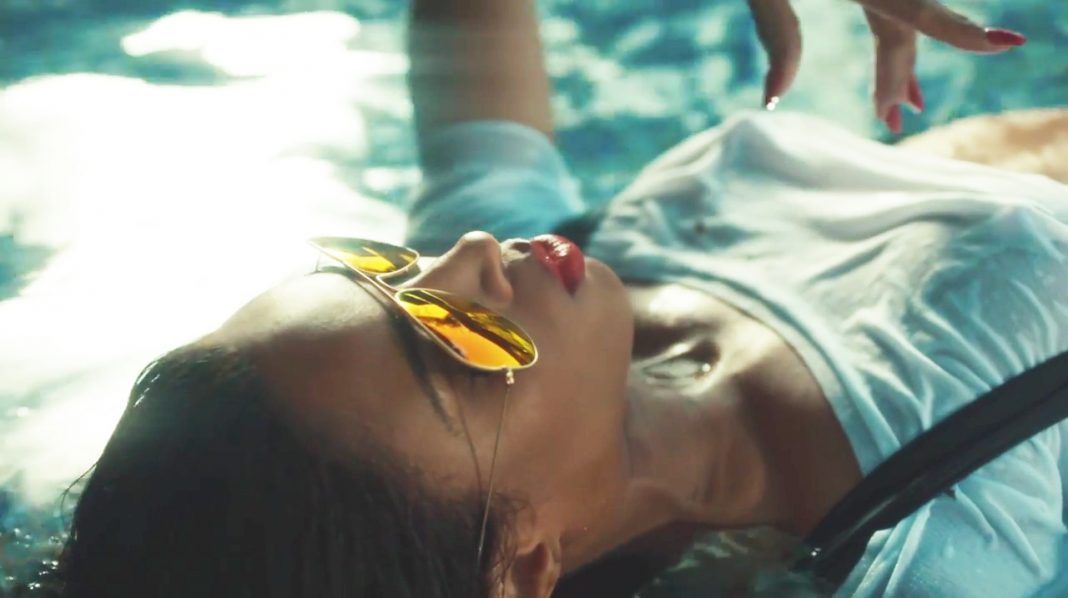 We watched the video today and thought we’d have a little fun with it by writing a Seduction tips from Ciara piece.

Ciara seems like she’s one of those women who knows how to get what she wants. She’s confident. She’s strong. She’s beautiful. She’s rich.

We imagine guys come already “ready” when Ciara invites them over. She doesn’t have to do anything to get them worked up. But it’s probably fun to play the seduction game anyway.

For the rest of us who have to try a little harder to capture and hold our guy’s attention, we think Ciara’s “Dance Like We’re making Love” video offers some interesting hints and tips.

Note: We’re just having a little fun. This is not to be taken seriously.

So what are the seduction tips that we’ve taken from Ciara’s Dance Like We’re Making Love Video?

First you want to get yourself in the mood well before you unleash your sexy vixen-ness upon the object of your desire.

Ciara accomplishes this by donning a black slingshot bathing suit under which she wears a cut-off cropped white t-shirt. With red paint on her lips and nails, she immerses herself in a pool (we don’t actually see her get into the pool. But the video starts with her emerging from the pool, so she necessarily had to have gotten into the pool at some point).

She has some sexy fun while in the pool, posing and showing off, doing things like perching on a swing-thing that’s suspended over the pool and swinging from it in her stilettos.

Once she feels sufficiently wet (we’re talking about her skin and clothes), she emerges from the pool and goes to lie down poolside. All the while she’s singing to the guy with whom she desires to dirty dance. He’s not physically present yet. She’s singing to him as if he’s there, telling him about the state of her body (it’s dripping sweat she says) and her desire to see his moves.

The tip: Get yourself prepped and in the mood. Put on a sexy outfit. Put on some red lipstick and red nail polish and play out the planned seduction in your head as if it’s happening.

In Ciara’s imaginations she switches from the pool scenes to scenes of herself in a sexy red dress standing on a balcony one moment, dancing in a garden the next.

She envisions her guy walking toward her as she’s dancing in the garden. He’s looking all suave in his dress shirt and dress pants. He’s obviously mesmerized by her. And why wouldn’t he be? She’s mesmerizing. The way she does her thing…

You probably don’t need to go to such extremes yourself. But do imagine yourself as a beautiful, mesmerizing goddess with a few things you can and will teach your unsuspecting guy. Sing of your desire to dance like you’re making babies. Imagine yourself as Ciara does, dressed for the seduction in your blue lingerie singing to him about being sure he wants to play. Because once you’re turned on, you can’t be turned off.

Caress your body as you sing and sway.

Crawl on your floor….

By the time your guy arrives you’ll be rearing and ready to perform an energetic tribal dance.

What do you think of Ciara’s “Dance Like We’re Making Love Video”?

From the fashion and beauty perspective:

We liked the red dresses she wore in the video. We also liked the black dress. But we’re not sure you can call it a dress. And for sure, you can’t have breasts that move if you want to be able to pull off the kind of high energy dancing Ciara was doing in that dress.  No way your girls would stay put like Ciara’s does.

While the slingshot swimsuit isn’t exactly something we’d wear, Ciara looks good in it. And that’s really the takeaway from this video at the end of the day. Ciara is gorgeous. She has a strong, fit and enviably sexy figure which she bares completely nude (somewhat) in the video. And she’s a confident woman who is fearless about going after what she wants.

So to wrap this up, your tips for seduction in a nutshell