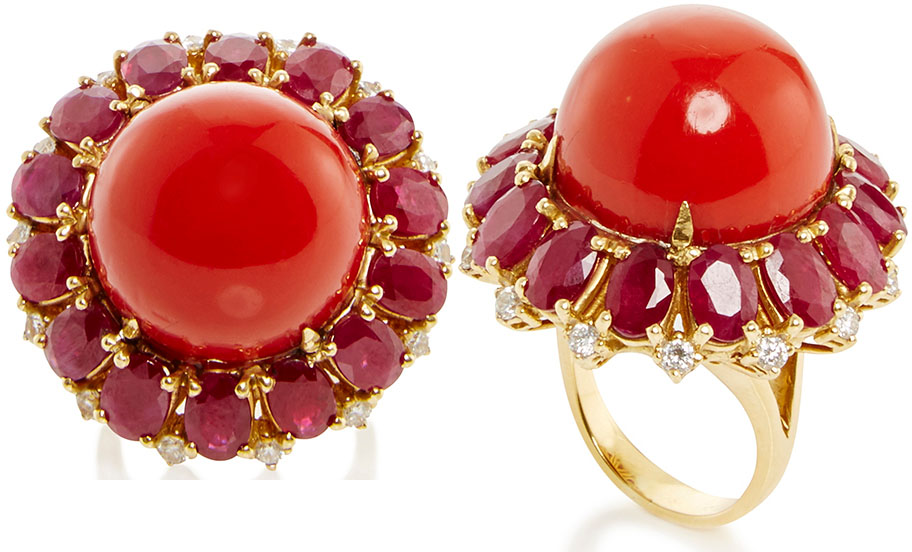 How gorgeous is this Fruzsina Keehn red coral ruby and diamond ring?

From the Fruzsina Keehn collection, this ring is said to have been inspired by old Hollywood glamour. It features a red coral gemstone that’s surrounded by rubies set in gold.

This ring is available at Moda Operandi. Looks like they only have it in a size 5 right now, so we would only be able to wear it on our pinky finger if we were so lucky to be able to afford to buy it. As it is, we’re not rich ladies who can afford to purchase $16,940 rings.

What we love about this Fruzsina Keehn Red Coral And Ruby Ring:

Anatomy of a red coral

From Wikipedia – In common with other Alcyonacea, red corals have the shape of small leafless bushes and grow up to a meter in height. Their valuable skeleton is composed of intermeshed spicules of hard calcium carbonate, colored in shades of red by carotenoid pigments. In living specimens, the skeletal branches are overlaid with soft bright red integument, from which numerous retractable white polyps protrude.[3] The polyps exhibit octameric radial symmetry.

She was virtual window shopping when she saw the Fruzsina Keehn Red Coral And Ruby Ring. It looked so big and beautiful. She immediately fell in love with it; but then she saw the price tag. Sixteen thousand nine hundred and forty dollars. “Wow”, she thought to herself. She had expected it to be expensive. After all, she was on ModaOperandi.com where they strictly sold high end merchandise. But it was just a ring. So although she had expected it to be too expensive for her to afford, she hadn’t expected it to have a 5 figure price tag.

“How are some people able to afford such expensive things?” she wondered to herself. Her mind ran on a headline she’d seen earlier in the day. It was about Khloe and Kourtney Kardashian and how readers would be jealous to see the inside of their homes. She remembered reading the headline and wondering what accounted for how much fortune some people were able to amass by comparison to others. Was it just being pretty? Was that all that it had taken for the Kardashian girls to rise to such a height of fame and fortune that each of them lived in multi-million dollar mansions and could easily afford to spend sixteen thousand nine hundred and forty dollars on a ring without batting an eyelash?

She wasn’t convinced that it was just because they were pretty. Their prettiness was a big factor; but if just being pretty was all it took to reach that level of success she too should be living in a multi-million dollar mansion and be able to buy herself the Fruzsina Keehn Red Coral And Ruby Ring. But she didn’t live in a multi-million dollar mansion. She lived in a one-bedroom apartment, and she made under $30,000 per year in income even with her Bachelor’s degree. What had she done wrong? She was asking herself that question as she browsed away from the page on the Moda Operandi website. What was the mistake that she made with her life? And was it something that she could fix? Was it possible now that she was thirty-two to start over her life? Was it possible for her to ever be so wealthy that she could afford to spend sixteen thousand nine hundred and forty dollars on a ring because she liked it and wanted it?

Which Tamara Mellon boots say you?