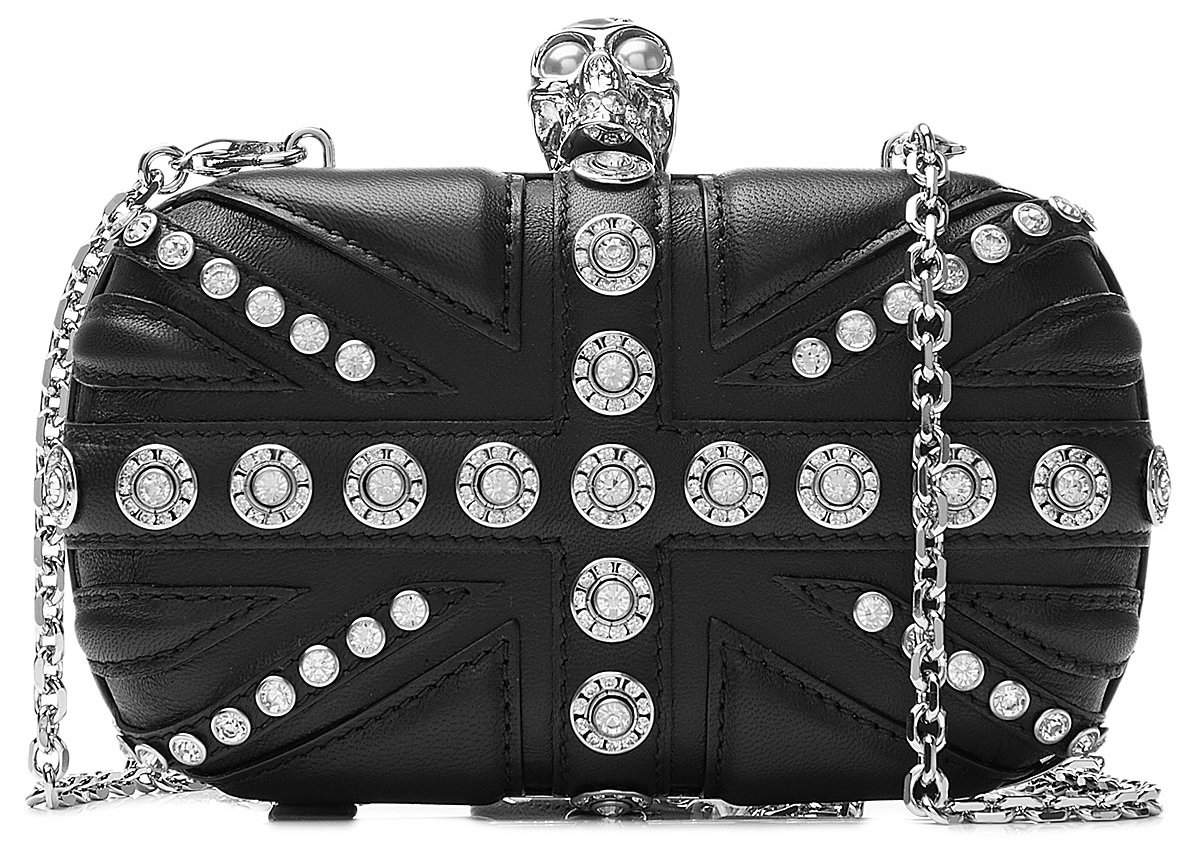 Via Stylebop.com you can purchase this Alexander McQueen clutch. This embellished leather box clutch comes with a $2,245 price tag with features including black leather, stud and crystal embellishment, silver-tone skull clasp closure with crystals and faux pearl eyes. This structured Union Jack Alexander McQueen clutch is lined in leather and has a silver chain link strap to accent your edgy outfits.

When you are a purse, like I am you witness many things. You witness the day you are created as well as the day that you are then taken and put into a warehouse. You also see the day that you are finally taken off that shelf and are shipped to your new home where you hopefully will remain for many years to come. This is what happened to me in the last week. I was finally released from my warehouse prison and was sent to live in a beautiful new location that was in the middle of Manhattan. For me this was a dream come true as my designer only continued to watch Sex in the City reruns all the time. All I could imagine was having a life and an experience of my own.

My new owner was a young woman named Jennifer who was an executive at a local tech firm. She was very successful at work, she had a lot of style but when she went into the office, she looked more like a high school hacker than she did an executive. Forget that whole part of getting out and having a life. Jennifer was smart and sophisticated but her closest companion was her laptop. Jennifer decided that she had enough one day and decided that it was time to break out Tinder. She then was looking through the men, and a very cute one caught her eye. He was a little older, in his early 50’s with a killer smile and broad sexy shoulders. He asked her the one thing that she was not accustomed to, let’s meet now.

“OK, just give me thirty minutes!” Jennifer said and frantically got off of her iPad. She jumped into the shower and ran like a mad woman through the apartment looking at dresses and shoes. She finally found a cute little black cocktail dress as well as a pair of heels. In the shuffle she almost forgot that she was leaving me behind. I casually tried to knock myself off the shelf onto the floor so that she would remember that she needed a killer clutch. After all, what else goes with everything? Thankfully, she got my message and picked me up, although as she began to put all of her stuff in me I felt very empty because I realized that I only had keys and a hairbrush in me. Jennifer out of nerves was forgetting like half her stuff. She scuttled to pick up what she remembered to get and headed for the door. When she was out the door, she then realized that she was on her way to a date. I saw Jennifer blush and smile from ear to ear when she realized that she was on an actual date with this amazingly hot man. She was very excited as it was the first one in a very long time. She arrived at the location, and I saw him standing there in the moonlight, looking a bit like James Bond.